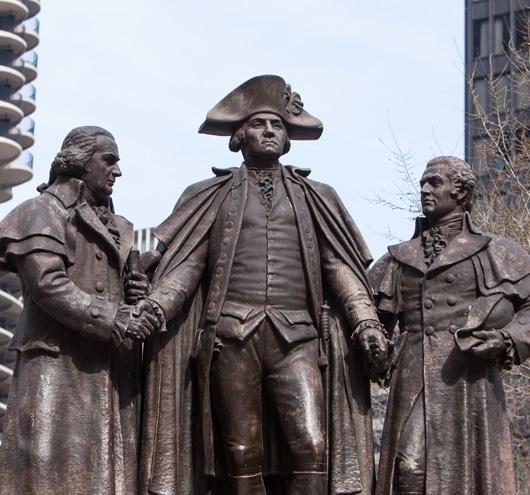 "Usually, we look at a statue involving George Washington and all we see is George. In this case, after you hear the monologue, I think you’ll look a little bit harder at Haym.”

Haym Salomon’s life was brief and tumultuous, but his impact on America was great. A Polish-born Jewish businessman, Haym Salomon (1740 – 1785) advanced from penniless refugee to become one of the most important financers of the American Revolution.

Risking his fortune, he helped fund General Washington's army, securing loans at rock-bottom prices. After the war was won, Salomon used his own money to help finance America's newly-formed but impoverished government.

Sadly, his generosity was not repaid. It seemed that Congress did not recognize their debt to Salomon, refusing to repay the money they'd borrowed. When Salomon died in poverty, at the age of just 45. His family was left unable to reclaim their debt from the government. In 1975, The U.S. Postal Service issued a stamp hailing Salomon as a ‘Financial Hero of the American Revolution.’