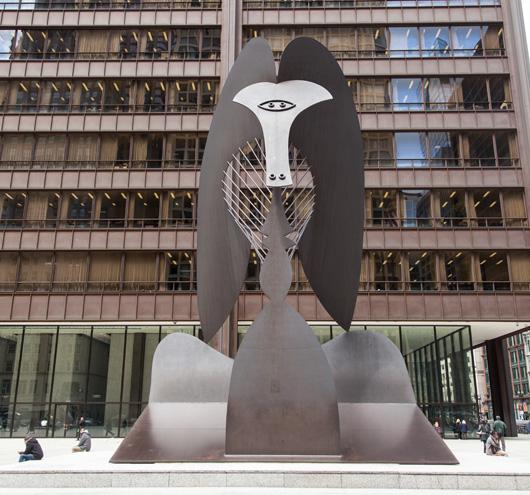 Produced with The Goodman Theatre

"I was delighted to give voice to perhaps the most controversial and enigmatic of Chicago’s many public statues. Because Picasso left it untitled, the question is still a subject of debate: What is it? What fun to ponder that conundrum!”

In 1963, Richard J. Daley Center architects tried to entice Pablo Picasso to create a sculpture for the plaza in front of their proposed building. They wrote him a poem, calling Chicago ‘a place waiting for a spirit, the spirit in a sculpture,’ and ending with the question ‘will you do it?’

Armed with a scrapbook packed with Chicago photographs and quotations about the city, they flew to France to appeal to Picasso in person. Their efforts paid off. Picasso accepted, refusing the $100,000 he was offered, and assured Chicago that his sculpture was a gift.

Many wonder what the 50-foot tall, 162-ton sculpture is meant to emulate. Some think the figure is a long-necked, high-ponytailed woman inspired by Picasso’s muse Sylvette David. However, the sculpture has also been likened to the jackal-headed god, Anubis, an afghan hound, and even a cow sticking out its tongue. But what actually is it?