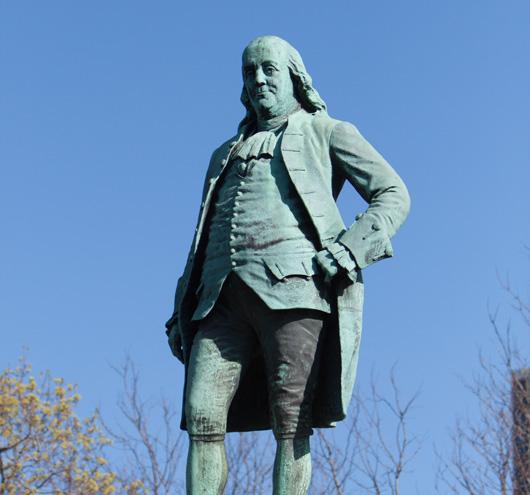 "I was thrilled to be asked to give voice to this great and lusty and funny Founding Father. Molly Regan's text captures him perfectly.”

Along with the Old-Time Printers' Association, Chicago Tribune editor Joseph Medill commissioned this statue in 1896. They wanted to pay tribute to Benjamin Franklin and his extraordinary achievements.

A true Renaissance man, Franklin (1706 – 1790) was a politician, scientist, author, activist, and diplomat. In fact, Franklin started his career as a publisher, printer and writer. As an author, he often opted to use a pseudonym. Although he wrote many titles, including the yearly Poor Richard's Almanack, he enjoyed denying this fact.

Franklin also established the colonies’ first lending library, volunteer fire company, and postal service. And if that wasn’t enough, he was a Founding Father of America, helping to draft the Declaration of Independence and Constitution. All that, with less than two years of schooling! His wit and wisdom were considered extraordinary, and were as highly regarded in his time as they are today.