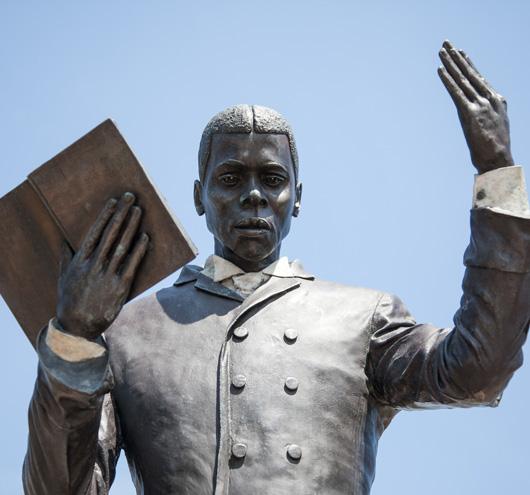 "Who wouldn't want to be a talking statue? To be able to embody an important voice like Paul Dunbar and make history come alive is nothing short of incredible.”

Paul Laurence Dunbar (1872 – 1906), the son of freed slaves, was born and raised in Ohio. His widowed mother was determined to give him a good education and under her guidance, he flourished.

Unable to afford college tuition, Dunbar attempted to find work as a journalist. Despite his literary talent, he met with rejection due to racial discrimination. He self-published his first book of poems, Oak and Ivy, while working as an elevator operator in Chicago, regaling ‘passengers’ with poetry readings and offering to sell them copies of the book. He soon became known as the ‘elevator boy poet.’

Dunbar got his big break when invited to read his poetry at the 1893 World’s Columbian Exposition. Soon after, Dunbar’s poems were published in major newspapers across America.

Dunbar died aged 33, having published over a dozen books. He was among the nation’s first African-American poets to gain international attention.