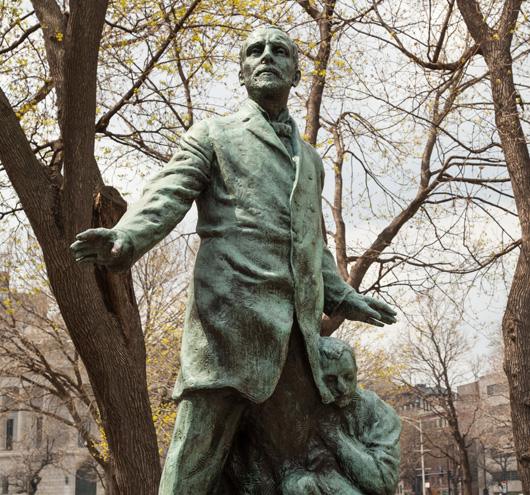 "I wish every statue in every park in the world had a little recording that told you why the person commemorated had earned such recognition. I hope everyone who listens to Altgeld's statue will come away ready to make some sacrifices for the good of the w”

The son of an illiterate German farmer, John Peter Altgeld (1847 – 1902) left school at 12 to work on the family farm. He proceeded to become a lawyer driven by social justice and was later elected as the Democratic Governor of Illinois.

As Governor, he fought for workers’ rights and child labor reforms. He was propelled to national prominence when he pardoned 3 of the men accused of the 1886 Haymarket Bombing. Altgeld insisted that these men had not been granted a fair trial and that the evidence against them was pure fabrication.

The press condemned Altgeld for his leniency, calling him an ‘anarchist and murderer.’ These labels haunted him for the rest of his life. Altgeld ended his days in relative obscurity, working in the law office of his friend, Clarence Darrow. He was just 54 when he died. Today it is widely recognized that the trial of the Haymarket Bombing was riddled with corruption and that the accused men were indeed innocent.